Microsoft has decided to attract multiple user profiles to its Edge web browser – which is highly commendable – and to do so it seems determined to add all kinds of additions to it, seeking to adapt it to multiple dynamics of use.

Thus, in recent months we have been seeing how it integrated in the experimental versions of Edge from a math operations solver to functions related to e-commerce, through a citation collector, a ‘feed tracker’ or integration functions with MS Office.

Now, has added to this list a games panel integrated into the Omnibar bar, which allows access to numerous web video games, most of them arcade, puzzle, card and sports games from the MSN Games platform, as can be seen in the image above.

This latest addition has been known thanks to its filtration by a Reddit user, having been one of the few who have randomly received this new feature in their Edge Canary installation. 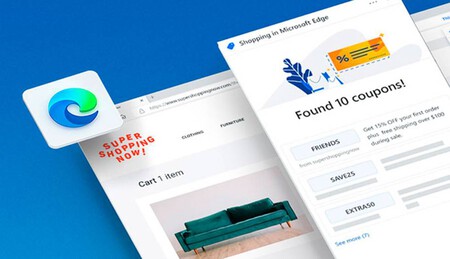 The management of purchase coupons, another recent addition.

All this series of additions makes many users wonder if Microsoft is not starting to ‘bloat’ Edge more than it should and yes, as they are not fundamental functions of a browser, you should not launch them as mere extensions (even as default install extensions, if they deem it necessary, as long as they could be disabled).

The problem, furthermore, is that are added functions without a clear articulating axis, in a way – as one would say now – ‘random’.

What can Microsoft learn from a former rival?

Over time Netscape concluded that it had ‘bloated’ its software too much, which ended up being inherited and ‘dismembered’ by the Mozilla project, hence the Firefox browser, the Thunderbird e-mail client, the Sunbird calendar + agenda, the Composer editor, and so on.

Users negatively perceived this bloat of their browser despite the fact that they were interrelated functions and that each had its own executable. So, what can we think of a browser that begins to add so many different and dispersed functionalities as Edge, and also does it by integrating everything in the same program?

Do youThey are probe balloons that you will end up removing from the browser – after all, some of them have not yet reached the stable version -, or does Microsoft have a clear roadmap?